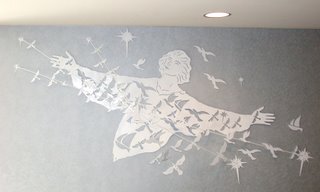 
It's cut in 19 gauge steel and painted with white enamel. The piece measures 6 ft 6 inches wide ( 1.95 meter) by approximately 4 ft high (1.20 meter). The steel lines coming bending out from the all, represent latitudinal lines such as found on a globe or map. The lines project out about 1 ft from the wall (30 cm)
The color of the piece is actually a vivid white, but the peculiar blue gray wall covering behind the piece seems to have confused my camera a great deal.
The woman in the sculpture is dissolving into the many birds, boats, stars, leaving the retirement home in spirit and dreams if not in her body.


Returning to my truck, Mr Davis and I paused at the main hall entrance and he motioned to the glass case of photos of residents in their WWII uniforms. There had been a contest to see who still looked the most like their old photo. "I have a photo of Betty in her WAV uniform," he said, "but I wouldn't put it in here with the other women. Not fair. She was a lot prettier than they were."


They have been together 63 years, but the last ten years, she's been slipping away from him, parting them for far longer than the war ever did. Back then, they could write, but now there is no letter he can write that she can read or ever respond to.
He has lunch with her every day.
He sees her in the morning and helps nurses tuck her in at night.
Still, they are parted more sternly than the vagaries of war ever did. You cannot write to a mind that has slipped below the sunset of Alzheimer's.
He is like a man putting messages in a bottle thrown in the sea. As long as there is any chance of a last letter reaching that pretty young woman so far away he will write. He writes to her now by simply being there, touching her, by saying "Good Morning." or "I love you." Maybe one will get through. He never knows.
But she waited for him, and he, by God, will wait for her.
Until their liberation.

POSTSCRIPT-- a little over four years later, Betty slipped away. Mr Davis did not speak at the funeral, but his children and grandchildren did. They remembered an independent woman who had grown up in western Colorado, able to shoot and ride. They remembered with pride their mother's stand for civil rights in Raleigh in the early 1960s. Mr Davis published his memoirs for his children and grandchildren in 2013.
Posted by Joel Haas at 5:40 PM

Joel Haas
I make whimsical animals for the garden. Most pieces are welded and forged together from scrap steel parts and painted with rust-resistant primer. The final colors are applied with sign-painters' lacquers which won't fade in sunlight. Some people have asked me if there is any serious or deep meaning to my work. I say, "I hope not. There're already enough serious and deep meanings in the world to keep thousands of art critics busy." I just make stuff that transports me to a happier place where I can hum and whistle. Art can do that.